The Inspire Award is given to the Team that the Judges felt truly embodied the ‘challenge’ of the FTC program. This Team serves as an inspiration to what this program and the young minds involved, can accomplish. The Team that receives this Award has performed well in all Judging categories and was chosen by the Judges as a model FIRST Tech Challenge Team. The Judges used Match performance, observations made during interviews and in the Pit area, the Team’s Engineering Notebook, and performance on the Playing Field in determining the winner. 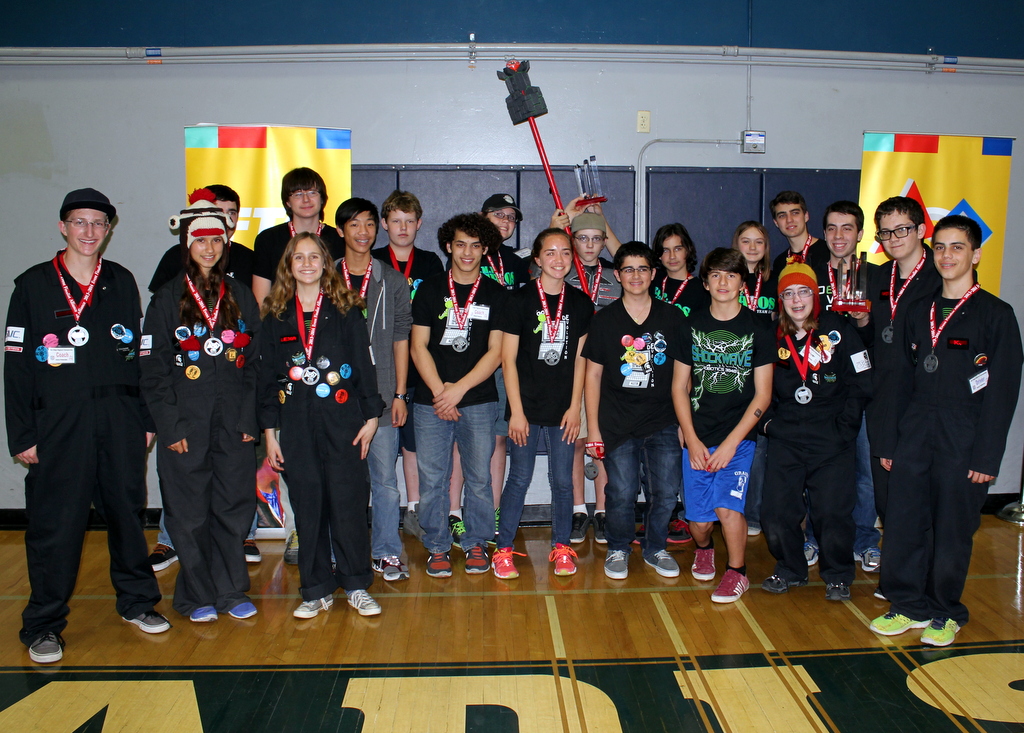 This Judged Award celebrates the Team that exemplifies the essence of the FIRST Tech Challenge Competition through Team spirit and enthusiasm. This Team shows their spirit through costumes and fun outfits, a Team cheer or outstanding spirit, or through their collective efforts to make FIRST known throughout their school or community.

Connect Award
Presented to Rock n Roll Robots, Team 25 from Pasadena
Connect Award Finalists
Team 135, Fusion
Team 6565, Stuffed Dragons
The Connect Award is presented to the Team that the Judges feel most connected with their local community and the engineering community. The best Team is more than the sum of its parts, and recognizes that their schools and communities play an essential part to their success. The recipient of this Award is recognized for helping the community understand FIRST, the FIRST Tech Challenge, and the Team itself. In addition, the Team that wins this Award is aggressively seeking engineers and exploring the opportunities available in the world of engineering, science, and technology.

Rockwell Collins Innovate Award
Presented to Kings and Queens, Team 4625 from Monrovia
Rockwell Collins Innovate Award Finalists
Team 6565, Stuffed Dragons
Team 4119, Brain Nuggets
The Rockwell Collins Innovate Award celebrates a Team that not only thinks outside the box, but also has the ingenuity and inventiveness to make their designs come to life. This Award is given to the Team that the Judges feel has the most Innovative and Creative Robot design solution to the FIRST Tech Challenge to any or all specific Field Elements or components. Elements of this Award include elegant design, robustness, and ‘out of the box’ thinking with regard to design. This Award may address the design of the whole Robot or some sub-assembly component attached to the Robot. The creative component needs to work consistently, but a Robot does not have to work all of the time during Matches to be considered for this Award. The Team’s Engineering Notebook showed the design of the component(s) and the Team’s Robot, and described succinctly how the Team arrived at that solution.

The intent of the PTC Design Award is to expand the challenge, inspiring Teams to incorporate industrial design into their Robots. These elements can be shown in the simplicity of the design as it applies to the tasks, the look and feel of the Robot, and how the design allows us to think of Robots in new ways. The Design aspect must serve a function, but they should also differentiate the Robot in a unique fashion, not an easy task with a limited set of parts and Game challenge.

Promote Award
Presented to Metal Ducks, Team 5826, from Hemet
Promote Award Finalists
Team 25, Rock n Roll Robots
Team 6373, Parabots
The Promote Award is given to the Team that is most successful in creating a compelling message for the public designed to change our culture and celebrate science, technology, engineering, and math. The FTC Public Service Announcement Video was evaluated by the Judges to determine the winner of this Award. Teams must present a thoughtful and high-quality video which appeals to the general public.


Control Award
Presented to Brain Nuggest, Team 4119 from Long Beach
The Control Award celebrates a Team that uses sensors and software to enhance the Robot’s functionality in the Field. This award is given to the Team that demonstrates innovative thinking in the control system to solve Game Challenges such as Autonomous operation, enhancing mechanical systems with intelligent control, or using sensors to achieve better results on the Field.

Judges Award
Presented to Kronos, Team 2885 from Escondido
Judges Award Finalists
Team 3650, Torrey Techies
Team 5822, Bacon Bots
The Judges Award is given at the discretion of the judges to a team they have encountered whose unique efforts, performance or dynamics merit recognition, yet the team does not fit into any of the existing award categories.

We’d like to wish the VERY BEST OF LUCK to:

We’d love to hear your stories.  Please consider sharing them with us here in the comments below or on our facebook page.  Photo and video links welcome!