QUALIFIED FOR CHAMPIONSHIPS IN ST. LOUIS!!!
The following teams and individuals earned top honors at the Los Angeles Regional and earned their way to compete at the FIRST Championships in St. Louis in April.
Regional Chairman’s Award
Team 2576, Chilean Heart – Santiago, Chile 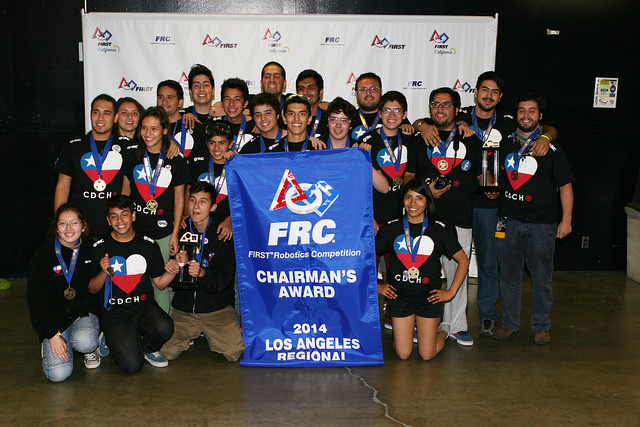 The Los Angeles Chairman’s Award represents the true spirit of FIRST.  It honors the team that best serves as a model for other teams to emulate and that embodies the goals of FIRST.  It remains FIRST’s most prestigious team award.  The Chairman’s Award is presented to the team judged to have the most significant measurable impact of its partnerships among its participants, school, and community over a sustained period, not just a single build season or school year. The winner is able to demonstrate progress towards FIRST’s mission of transforming our culture.  The recipient will be invited to the FIRST Championship where it will compete for the Chairman’s Award against the winners from all the other qualifying events.
Here’s what the Judges had to say –

“This team comes from a culture that does not celebrate science and technology. They embarked on a five year plan with a goal of establishing at least one new FRC team. In the process, they have created an environment where 90% of the team members go on to a four year university and 70% of them pursue STEM majors.  Traversing an entire country and beyond, they have exceeded their team’s plan by creating three FRC teams-two in their country and one in Long Beach.” 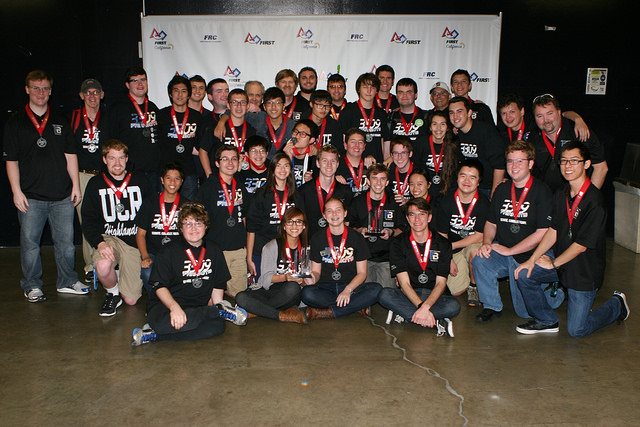 The Engineering Inspiration Award celebrates outstanding success in advancing respect and appreciation for engineering within a team’s school and community.  This team will advance to the Championships and receive a $5000 NASA grant toward registration.
Here’s what the judges had to say –

“This younger team has grown by leaps and bounds since their inception: spanning 3 schools, growing by a factor of 3, and currently comprised of 30% women. They have founded an alliance in their county which brings their brothers and sisters together in the spirit of cooperation and gracious professionalism. Their outreach is also a multiple of three, as they run a robotics summer camp, host middle school workshops, and run a peer mentoring program. As you can see, this team is all about threes, even stretching to their team number: 3 times 3 plus zero equals 9.” 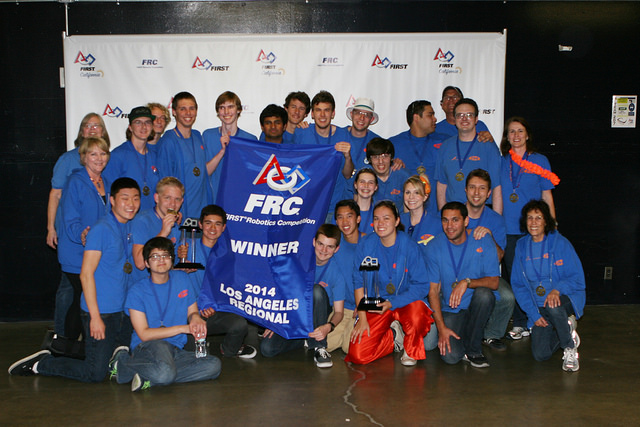 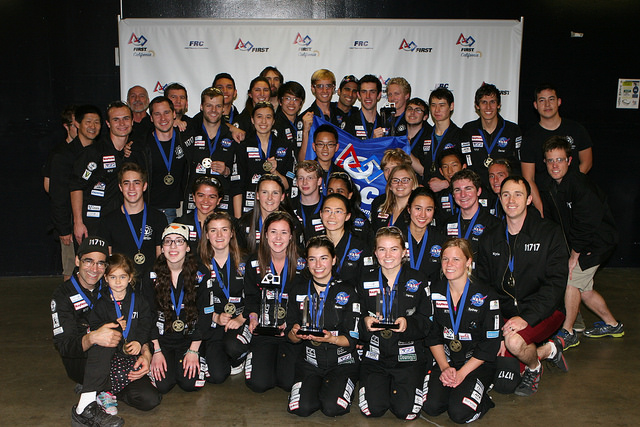 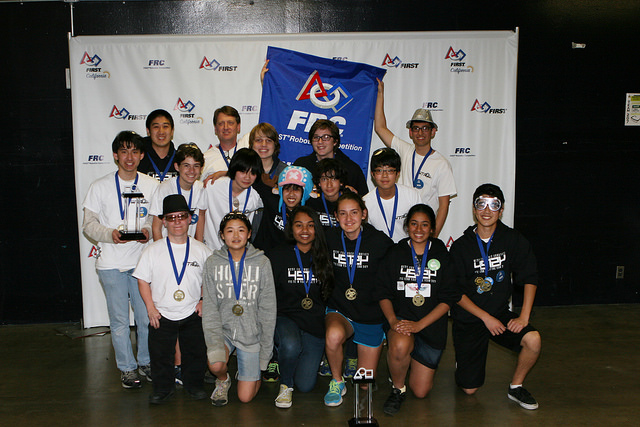 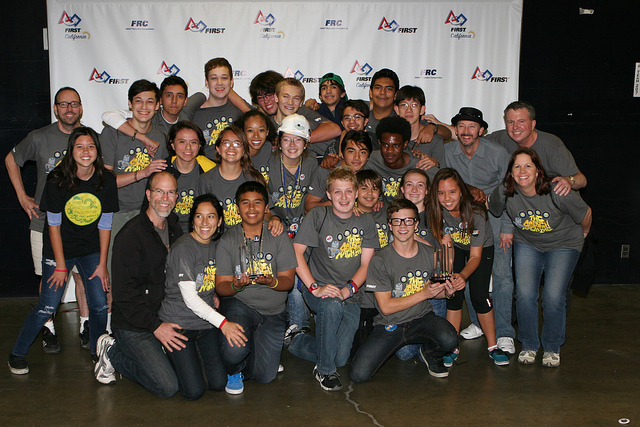 “This multi-school team took the time to diligently plan for their rookie season and beyond. Their activities have focused on informing key individuals in the education system, spreading the importance of engineering project based learning and providing training in areas of safety and skill sets to help raise robotics to a level on par with sports programs.
Although they received excellent guidance from their mentors, time demands raised expectations of team members to manage the team and they truly rose to the challenge.” 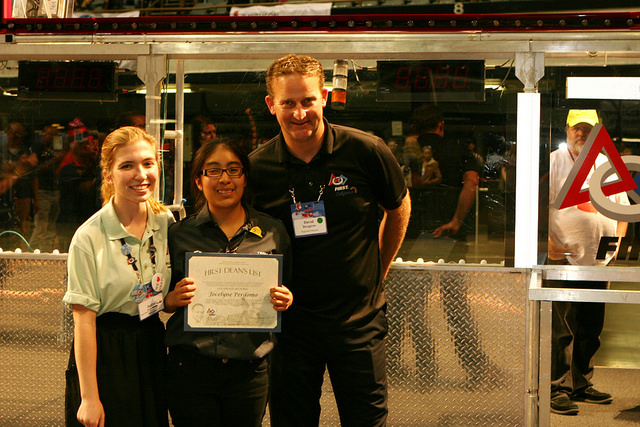 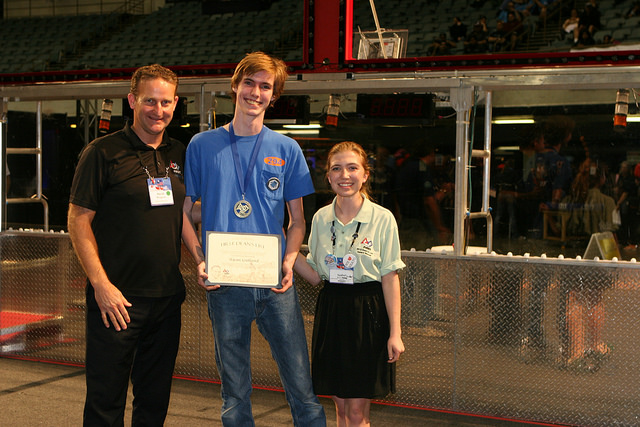 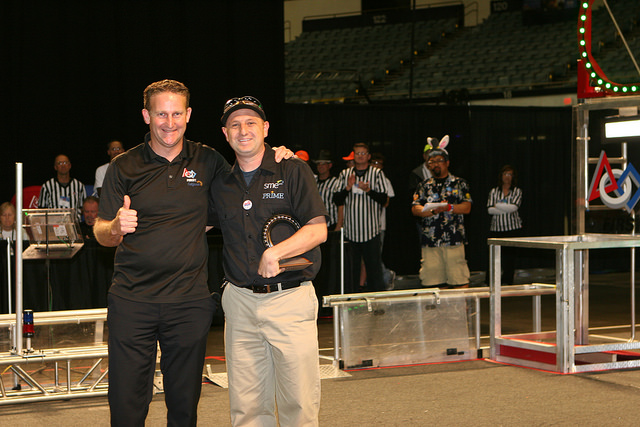 Volunteer of the Year Award
Stephen and Jill Petty
We can’t thank them enough for their ongoing commitment and hard work to ensure that the Los Angeles Regional continues to thrive. 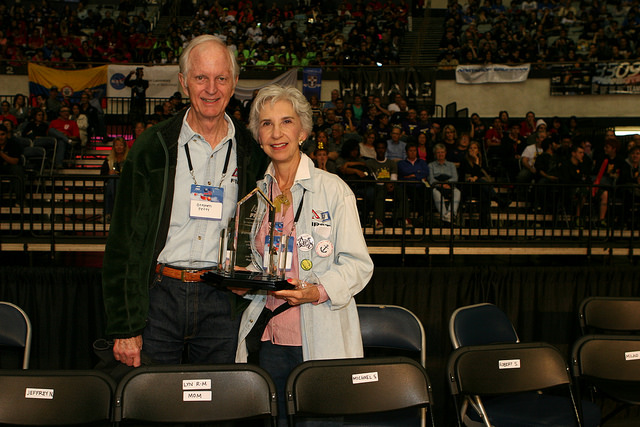 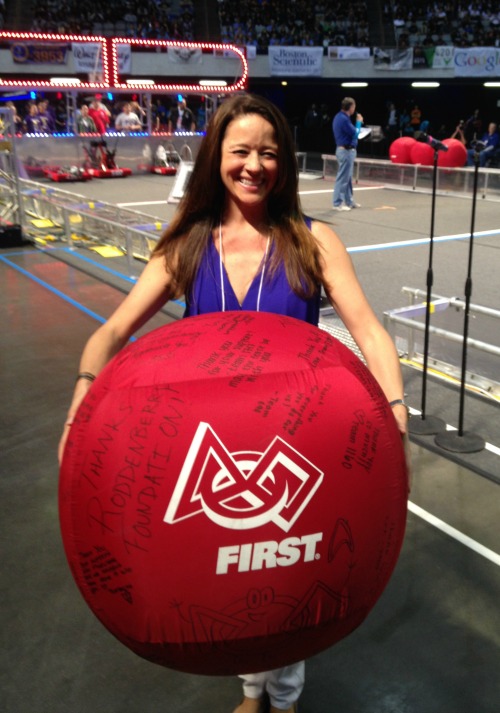 We hope you too had a profound experience at the Los Angeles Regional.  We’d love to hear your stories.  Please consider sharing them with us here in the comments below or on our facebook page.  Photo and video links welcome!